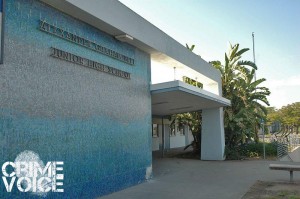 San Diego- A middle school teacher from San Diego was arrested Tuesday after a search of his North Park apartment led federal investigators to pornographic images of children on DVDs that were found in his home.

The teacher, 39-year-old Timothy James Hensley began teaching at Alexander Graham Bell Middle School in 2005 where he was an 8th grade science teacher. In the 09’-10’ school year, Hensley was named the school’s “Teacher of the Year”.

The investigation on Hensley was commenced by the Immigration & Customs Enforcement (ICE) after they had received a tip from the internet.

Agents from the Homeland Security Investigations along with members of the Internet Crimes Against Children Task Force (ICAC) carried out a search warrant at 6:30 a.m. Tuesday morning on Hensley’s apartment. However, since Hensley was not under arrest, he was able to leave his apartment while investigators served the warrant

Along with five iPods, an iPad and three computers, investigators found computer discs which contained pornographic images of children as well as videos of minors as young as five engaging in sexually explicit acts. Investigators were also able to find around 290 DVDs; an earlier check of the DVDs found that some contained pornographic images of children.

After discovering the videos and images, investigators began to search for Hensley’s whereabouts. They later located him in a parking lot in his car near the San Diego Zoo. Hensley refused to cooperate with investigators and resisted arrest. Eventually, he was arrested and taken to a federal jail in San Diego.

A spokesman for the San Diego Unified School District, Jack Brandais, said Tuesday night that the school was not able to confirm the arrest, but said that Hensley had not been at the school on Monday or Tuesday.

Hensley has been put on administrative leave and will continue to receive his monthly salary of $4,500.

Neither the San Diego School District nor the ICE would reveal if any of Hensley’s students were involved in the pornographic images.