The San Luis Obispo Police are searching for a suspect who robbed the Golden 1 Credit Union on Foothill Road at gunpoint Thursday afternoon.

According to SLOPD, they received a 911 call regarding a male subject exiting Golden 1 with a gun and bag. Police say the male subject was last seen running northbound towards Boysen Street. Officers were dispatched to the area, established a perimeter and began searching for the suspect. 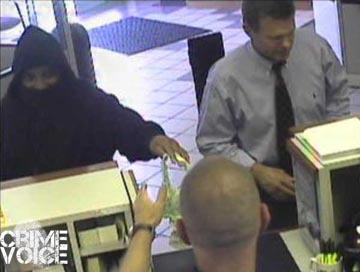 Surveillance image of the robbery in progress

Police say the suspect was described as a black or dark Hispanic male, approximately 5’9” tall, with a stocky build. The suspect was also described as wearing a dark hoodie sweatshirt, jeans, blue or purple tennis shoes and had a dark bandanna partially covering his face.

Police say no one was hurt during the bank robbery and the approximate loss was $4000.

According to SLOPD, the robbery is still under investigation and anyone with information is encouraged to call the San Luis Obispo Police Department at 781-7312, the FBI at 310-996-3999 or Crime Stoppers at 549-7867. 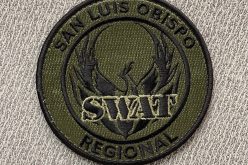