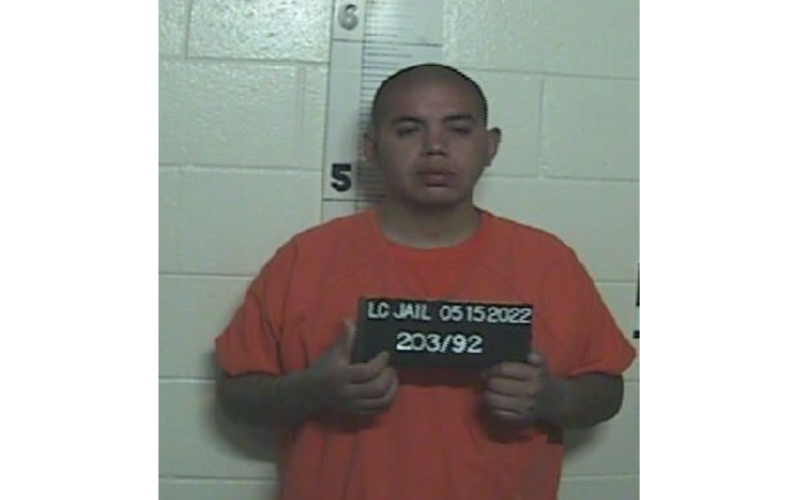 The Lassen County Sheriff’s Office has announced the arrest of a home invasion robbery suspect who allegedly kept a resident captive for several hours before leading authorities on a manhunt.

On the morning of May 14, deputies responded to home on Center Road to investigate an alleged robbery in progress, which was soon thereafter followed by a call that a vehicle had rammed through a metal gate about two miles from the robbery scene, being driven by a person matching the description of the robbery suspect.

At the scene, investigators spoke with the victim and learned that the suspect — later identified as 34-year-old Angelo Atencio — had ambushed her at gunpoint and forced her back into the house when she stepped outside earlier that morning.

She told investigators the suspect then tied her up for several hours while he allegedly ransacked the house, loaded the stolen items into the victim’s car, and fled the residence in the vehicle when two of the victim’s family members arrived. One of the family members reportedly fired two shots at Atencio when he got out of the car and began approaching, and he got back in the car and drove away, eventually ramming through a metal gate, the Sheriff’s Office said.

After striking the metal gate, Atencio reportedly abandoned the vehicle on foot. Responding deputies could not immediately locate him and brought in aerial units to help search the area.

Shortly after 11 PM that night, after an entire day of searching, deputies using handheld thermal imagers located Atencio in a creek bed. He attempted to flee on foot yet again but was taken into custody.

Atencio was later booked at the Lassen County Jail on suspicion of robbery, kidnapping, false imprisonment, vehicle theft, and other charges. He is also being held without bail due to parole violation, the Sheriff’s Office said.