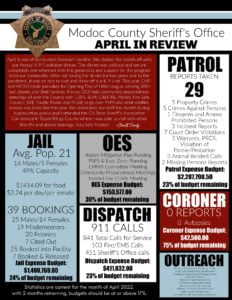 MODOC – The Modoc County Sheriff’s Office released their latest monthly report from April. Here is a breakdown from that report:

PATROL – a total of 29 reports were taken. 7 of them were court order violations, and 5 each were crimes against persons and property crimes.

DISPATCH – a total of 841 calls for service occurred this month.

JAIL – the average population of the jail was 21 individuals, 16 male and 5 female. This represents 49% capacity. A total of 39 bookings occurred, 19 misdemeanors and 20 felonies. 25 were booked into the facility, 7 were booked and released and 7 cited out.

With two months left in the fiscal year, the MCSO is operating with approximately 24%-30% of its budget remaining.