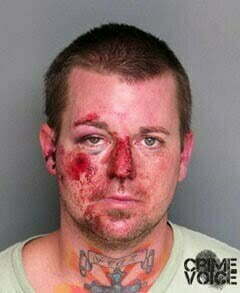 Adam Venuti showing the effects of his attempt to escape.

The Salinas Police responded to a call of an armed robbery in progress at the CVS Pharmacy on South Main Street. While in route, Officers received information that a white male armed with a large knife was attempting to rob the pharmacy located inside the store.

One of the officers that responded to the incident observed Venuti inside a vehicle that was pulling out from the curb on West San Joaquin Street. When the officer tried to pull over Venuti, he sped away.

Venuti drove a short distance in an attempt to evade pursuing officers. But he did not get far as his vehicle collided with several nearby-parked cars. He managed to drive the vehicle a few more feet before it stalled. 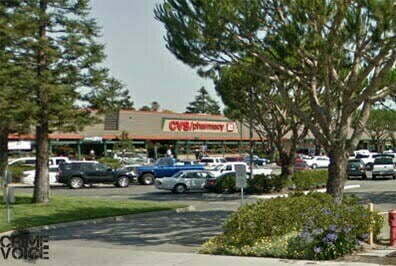 Responding officers spotted Venuti as he was pulling out of the CVS parking lot, he crashed after trying to escape.

He decided to leave the vehicle behind and try to flee on foot. Salinas Police Officers that were in the area searching for him captured him a short time later. Venuti received minor facial injuries in the collision with the parked vehicle. He was treated at a local hospital and released.

“He blandished a large knife at the Pharmacist and took several pills of Oxycodone before leaving the store.” Salinas Police Commander Michael Grove said, “Thanks to the quick response from officers in the area we were able to make this arrest.”

He was arrested and was booked into the Monterey County Jail. He faces charges of armed robbery and other associated crimes resulting from his attempted get-a-way.