A victim of a vehicle theft in Shasta County personally aided police in the investigation. 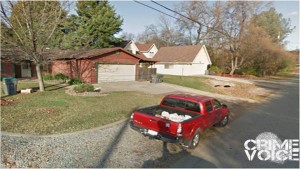 Wert spotted her vehicle being towed from this approximate location

After reporting her stolen vehicle to the Redding Police Department, Chelsea Wart led her own investigation to find it.

She reportedly used Facebook to collect information on her vehicle and was able to track it down to Shasta Lake. She then, went out herself and found the rear portion of her vehicle being towed from 1990 Hardenbrook Ave. Wart notified the police of her findings and followed the vehicle until she lost sight of it near Vallecito Street.

The deputies responded to Wart’s call and began watching the suspect’s home on Hardenbrook. The car was towed from that site. After an authorized search warrant of the home the suspect, identified as Cody Geisman, 23, admitted that he stole the vehicle and dismantled it. The deputies later found the front of the vehicle and the engine in different areas of the city and county. They also found a loaded “AK 47” assault rifle and other weapons during the search of the residence.

Geisman was arrested along with Krayton Lee Bodner, 32, whose involvement in the theft is not specified. The deputies are still investigating the case and say that more arrests may follow.