MADERA – Madera County is hoping to be part of the solution for the area’s jail overcrowding problems as it begins its jail expansion project. 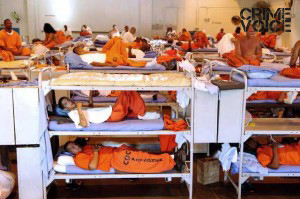 Madera County correctional officials broke ground on the $30 million project, which will add 144 new beds to the existing facility, located on Road 28 and Trail Way. The jail currently holds 419 beds.

The expansion is coming right in time, as the California Department of Corrections and Rehabilitation recently said that the state will start reducing its prison populations by transferring thousands of low-level, non-violent offenders to local jails over the next couple of years.

The expansion will also help Madera County avoid some of the problems that Fresno County has been seeing with having to release inmates early, said Madera County Supervisor David Rogers.

Among other things, Fresno has recently been dealing with problems caused by car thieves getting arrested and then put right back out onto the street because of jail overcrowding, only to repeat their crimes.

Rogers doesn’t want to see that happen in Madera County. He said you can have the world’s best police department and district attorney’s office, but “if you don’t have corrections, it’s all in vain.”

The project is being funded with state funds from the Department of Corrections and will allow the jail to increase its inmate population by 25 percent. If there’s a shortage of inmates, officials said that repeat offenders from Fresno may be able to be housed in the Madera County jail.

Two months ago, Fresno police Chief Jerry Dyer proposed that Fresno begin renting bed space in the Madera County jail where they could send the city’s most prolific thieves and burglars. Fresno would lease an average of five beds per day, which would be about $85 per day.

Nothing has been determined for certain, but Fresno Mayor Ashley Swearingen has $150,000 in the city’s budget she hopes can be used for the program next year.

Madera County Supervisor Chairman Ronn Dominici said that renting out extra beds in the jail could “be very profitable for (Madera) County.”

The jail expansion is expected to be completed in 2013.