HOLLISTER — After realizing the suspicious nature of the fire they’d just put out, the Hollister Fire Department quickly contacted police. Now the purported “victim,” identified as 21-year-old Lance Gallo Jr., will be charged by the DA’s Office.

On the evening of Tuesday, May 2nd, the Fire Department arrived at 808 Powell Street after reports of a fire. The caller claimed there’d been an explosion, followed by a fire which seemed suspicious.

The Fire Department found that the fire had started in a garage attached to an apartment complex. After extinguishing the flames, police were called in — and soon found evidence that the garage had been the site of a drug lab.

Officers discovered butane, marijuana, and other items used in the manufacturing of butane honey oil — a known form of concentrated cannabis.

Police called in the Unified Narcotic Enforcement Team (UNET) for assistance. UNET agents obtained search warrants and seized evidence from the scene, as well as disposing of any dangerous and potentially deadly products associated with the lab.

Police are asking the DA’s Office to  bring charges of manufacturing a controlled substance, unlawful use of fire, child endangerment, and possession of marijuana for sale against Gallo, the only individual associated with the lab.

At press time, Gallo was reportedly being treated at a Bay Area trauma center for second- and third-degree burns. 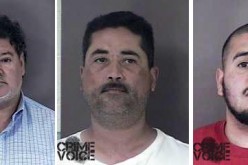