CASTROVILLE — A 19-year-old UC Santa Cruz student is lying in Sanford Medical Center recovering from injuries sustained during a fatal DU crash that took the life of 24-year-old Nikolas Malliarodakis of Prunedale.

The student, Lynnea Hernandez, stands to face numerous charges upon her release, including DUI resulting in injury or death, gross negligent manslaughter, and possession of methamphetamine.

According to the CHP, Hernandez was driving southbound on Highway 1 just north of Molera Road. She claimed to have rolled her window down to throw out a cigarette when she veered into oncoming traffic and collided with Malliarodakis’s vehicle.

Malliarodakis was pronounced dead at the scene.

Six of the seven passengers in Hernandez’s vehicle admitted to smoking marijuana during the ride. Hernandez claimed that she had only taken her prescribed medication.

A witness told officers she saw someone attempt to hide something in an adjacent field. Officers searched and found a makeup bag full of both marijuana and ecstasy pills. 19-year-old Sarah Cameron was then arrested for tampering with evidence. 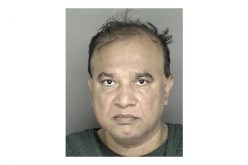