“On 7-22-22, Deputies responded to a report of grand theft which had occurred at business in Cambria which has requested to remain anonymous.

The victim reported a man entered the business with two women. While the man distracted the victim, the two women took a 14k yellow gold bracelet with sapphires and rubies.

Sheriff’s Detectives are trying to identify the three suspects who were captured on surveillance video. If anyone has information on this incident or the identities of the suspects, please contact the Sheriff’s Office Detective Division at 805-781-4500.” 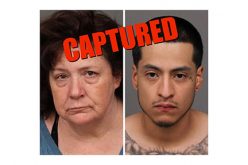