The investigation by Detectives was submitted to the District Attorney’s Office, who filed multiple counts charging lewd and lascivious acts with a child under the age of 14-years old.

An arrest warrant was obtained, and on 5-26-21 Sheriff’s investigators took 63-year-old James Peter Storton of Arroyo Grande into custody. The location of where these incidents occurred is being withheld to protect the victims and their family. Storton is a former Correctional Deputy. 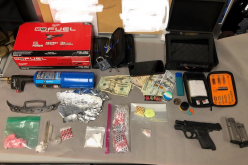