“SAN DIEGO – Ryan W. Nelson of San Diego was sentenced in federal court yesterday to 60 months in prison for committing three robberies, including two bank robberies and the armed robbery of a shoe store.

During the sentencing hearing, U.S. District Judge Cynthia A. Bashant told the defendant: “I just can’t ignore what you did in this case. It was dangerous and it was scary.” Nelson was also ordered to pay $11,572 in restitution to the businesses he robbed.

“These robberies were a terrifying and unforgettable experience for the victims,” said U.S. Attorney Robert Brewer. “Hopefully this sentence will restore a sense of safety to the victims and the community.” Brewer praised prosecutor Matthew Brehm, FBI agents and officials with the San Diego, National City and La Mesa police departments for their excellent work on this case.

“The FBI’s Violent Crime Task Force is out on the street with our local partners every day working to keep San Diegans safe,” said Suzanne Turner, FBI Special Agent in Charge of the San Diego Field Office.  “Violent crime investigations are a priority and our agents are dedicated to bringing justice for the victims and the communities affected by these robberies.”

Nelson entered his guilty plea in October of 2020,  admitting that on July 29, 2019, at approximately 8:45 a.m., he entered the Shoe Palace, located within the Plaza Bonita Mall in National City, dressed as a construction worker with a safety vest, safety glasses, and a hard hat.

In his plea agreement, Nelson admitted he told a Shoe Palace clerk that he was working on construction in the store above Shoe Palace and needed to inspect an electrical breaker panel in a room in the back of the store.  When Nelson returned to the front of the store, he approached a clerk, who was pregnant at the time, and pointed a black handgun at her. He demanded cash from the cash register, stating, “Give me all the money.” The clerk gave Nelson access to the cash register, and he took approximately $600 from the register and a nearby safe. After he took the cash, Nelson told the clerk, “Don’t call anyone or I will be back in five minutes!” He then fled the store, walked outside the mall, removed his construction worker disguise, retrieved a backpack hidden outside the mall, and changed his shirt.

Nelson also admitted that on August 15, 2019, at approximately 10:10 a.m., he entered the Vons Supermarket at 6155 El Cajon Boulevard, San Diego, and approached the teller window of the U.S. Bank branch located inside. Nelson pretended to talk on his cell phone but in fact gave the teller step-by-step verbal commands, demanding the teller to give him money by stating something similar to, “Grab a bag.

Start with the hundreds. Put all the money in the bag and give it to me, or I’m gonna shoot.” The teller complied with demands and provided Nelson with money from his teller drawer, totaling approximately $1,372. Prior to fleeing, Nelson told the victim teller, “Wait seven minutes, I’ve got someone in the store.” He then turned and exited the bank area, leaving out the east exit of the Vons Supermarket.

Nelson further admitted on August 23, 2019, at approximately 11:56 a.m., he entered the Vons Supermarket at 8011 University Avenue, La Mesa, California, and approached the teller window of the Wells Fargo branch located inside. Nelson pretended to talk on his cell phone but in fact demanded money from the three victim tellers by giving step-by-step verbal commands, stating something similar to, “Start with your 100s and put them in a bag, or I’ll start shooting.” The tellers complied with the demands and provided Nelson with a bag containing money from each of the teller’s drawers totaling approximately $9,600. He then left out of the Vons Supermarket’s main entrance.

Nelson also admitted that on August 29, 2019, FBI agents executed a federal search warrant at his residence and found a black bomber jacket, dark colored pants with white stripes down the sides, a navy blue-colored backpack, and a large black wristwatch, which were all items he was recorded wearing by surveillance cameras during, or just after, one of the bank robberies. FBI agents found a loaded, black .380 Smith and Wesson semi-automatic handgun in a drawer in Nelson’s room, which matched the description of the firearm he brandished during the Shoe Palace robbery. Agents also found $2,030 in cash on Nelson’s person, during his arrest.

This case is the result of the ongoing efforts of the Violent Crime and Human Trafficking (VCHT) Section.  Formed in 2019 by U.S. Attorney Brewer, the VCHT is tasked with leading collaborations between federal and local law enforcement in the investigation and prosecution of cases involving violent crimes, firearms and gang cases; sex trafficking and child exploitation; civil rights, and labor trafficking. The VCHT Section oversees the Southern District of California Coordinators for Project Safe Neighborhoods, Human Trafficking, and Project Safe Childhood.” 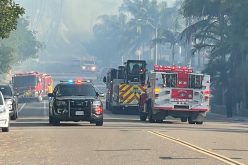