LASSEN COUNTY — Deputies arrested a home burglary suspect late last week after the homeowner and a neighbor held him at gunpoint until their arrival, according to the reports.

Around 4:30 PM on Monday, November 11, a resident in Standish called the Sheriff’s Office to report that the homeowner had a suspected burglar, 23-year-old Matthew Isaac Cisneros of Reno, NV, at gunpoint.

The caller also noted that Cisneros had armed himself with a firearm from the garage, and that a neighbor had also come over with his own firearm to help the homeowner keep Cisneros on the ground.

Responding deputies took Cisneros into custody, during which they found a .357 revolver in his waistband. Said revolver was identified as belonging to the homeowner and returned to him.

Further investigation revealed that Cisneros had driven to the area in a stolen Ford F-550 pick-up, entered the garage, accessed the gun safe, and placed numerous items in the homeowner’s boat, intending to make off with the entire haul — boat and all. 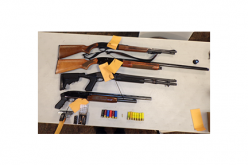