CALIPATRIA- A San Diego woman was arrested Saturday, accused of performing lewd acts with an inmate in front of witnesses at Calipatria State Prison, according to a prison official. 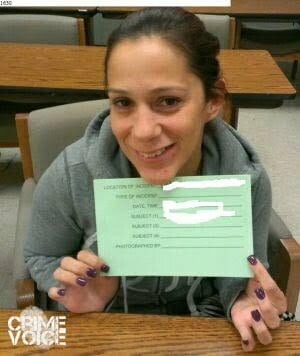 On Saturday November 23 prison staff was notified that suspicious activity was occurring in the visiting area of the Calipatria State Prison. Convicted murderer Antero Cruz was in the room with his 63-year-old mother and Crystal Lopez, 25 according to Lt. Everardo Silva, administrative assistant public information officer.

Lopez was engaged in lewd acts on Cruz, which staff witnessed when entering the room. According to a press release, Lopez admitted to performing sexual acts on Antero Cruz in front of his mother and other visitors.

Antero Cruz was convicted in 2012 of killing 14 year old Ahlyja Pinson and disposing of her broken body in a vacant house on New Year’s Eve 2007. The girl’s body had suffered multiple cuts, bruises and bone fractures, and more than 70 puncture wounds mostly to the head and neck.

A deputy medical examiner determined that Pinson had died of multiple blows to her head. There was evidence of strangulation, but no signs of sexual assault. Pinson’s body was found in a downstairs room of an abandoned house on E Street near 29th Street. Three days later the girl was identified through dental records.

A palm print belonging to Cruz was found on a wall near Pinson’s body. His DNA was recovered from a nearby cigarette nearby. The murdered girl’s blood was also found in the trunk of Cruz’s car. Cruz was sentenced to 26 years to life in prison in March of last year. At the time of his sentencing, Cruz was 24 years old.

Following Saturday’s incident of lewd behavior, Cruz was placed in the prison’s administration segregation unit, and Lopez was booked into Imperial County jail on suspicion of felony charges.