The San Luis Obispo Sheriff’s department has two men in custody after the suspects led deputies, CHP, and other agencies on a high speed chase from Cambria to Atascadero. 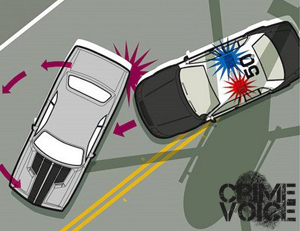 CHP used the maneuver shown above to stop the burglars' vehicle

According to police, the two allegedly attempted to burglarize an unknown location and were chased by CHP on Tuesday, December 18, around 7:10 a.m. after the sheriff’s office placed a “be on the lookout” warning for the suspect’s vehicle, a black Nissan pick-up truck.

CHP officers set up a spike strip, which the suspects avoided and continued to the Templeton area. The officers, then, tried using a PIT maneuver to stop the vehicle. A PIT maneuver is when a police officer taps the back side of a vehicle causing it to spin out of the driver’s control forcing the vehicle to stop.

Officers say the suspects jumped out of the vehicle and fled on foot on San Ramon Road on Highway 101.

CHP reports that during the chase one of their officers sustained minor injuries when one of the vehicle lost control and drove off the road into a culvert.

Both suspects were arrested after a foot pursuit with officers. Their identities are unknown at time of press.

Several schools in the Templeton and Atascadero area were put in lockdown as a result of chase.

“We were lucky the Highway Patrol was on the scene,” said Dan Eller of Cambria, who witnessed the chase. “They put their own lives at risk to protect the public.” 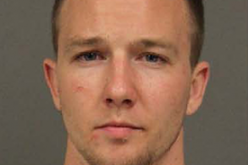 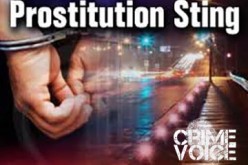