Two burglars were stopped in their tracks by a San Luis Obispo resident on Saturday evening. According to the San Luis Obispo Police department, units were dispatched to the Moose Lodge, located at 1130 Orcutt Road around 10:30 p.m. for an interrupted burglary. 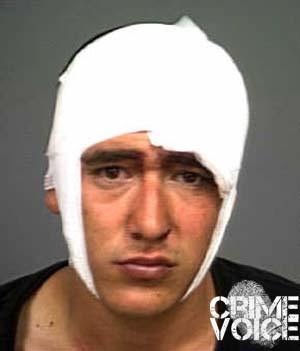 Jacob Zuniga, showing the effects of his encounter with the local resident

According to SLOPD, a nearby resident heard loud noises coming from inside of the Moose Lodge so he went to investigate. He told police that when he arrived, he was confronted by two suspects, later identified as Jacob Anthony Nuemann Zuniga, 22, of San Luis Obispo and Chanda Justine Miller, 27, also of San Luis Obispo.

The resident told police Miller brandished a knife at him and took his cell phone away from him as he tried to call 911. He said Zuniga then advanced at him with a knife, but he defended himself by striking Zuniga on the head with a metal “C” clamp that he had picked up earlier. Police say Zuniga and Miller then fled on foot, but SLOPD Officers located them within 15 minutes a short distance away. Police say there was extensive damage to the interior of the Moose Lodge and discovered a safe the suspects had removed from the building but were unsuccessful in opening. The Moose Lodge on Orcutt in San Luis Obispo

Zuniga and Miller were arrested for robbery and commercial burglary. Prior to being booked in SLO County Jail, Zuniga was treated for his head injuries at French Hospital. Bail for each suspect was set at $60,000.

KVEC: Two Arrested After Attempted Robbery At The Moose Lodge