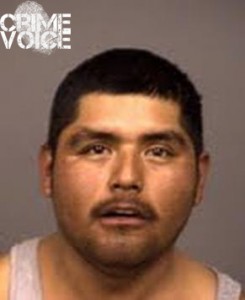 Felipe Martinez Jr. is being held for assault with a deadly weapon

A San Miguel man was arrested on Wednesday evening by San Luis Obispo Sheriff’s deputies after he allegedly attempted to slash his neighbor twice with a kitchen knife.

Felipe Martinez, Jr. and a neighbor, whose name is being withheld at this time, were reportedly arguing over personal issues, according to a SLO Sheriff’s press release. After the arguing had lasted some time, Martinez allegedly entered the victim’s mobile home, located in the Casa Blanca Mobile Home Park at 560 12th Street in San Miguel, just before 9 p.m. The two began arguing again, according to deputies. It was then Martinez allegedly slashed the victim on the back and on the arm.

According to the press release, Martinez then fled the scene.

Deputies located the knife nearby, and later located Martinez nearby. He was taken into custody without incident.

Martinez was booked in San Luis Obispo County Jail on charges of assault with a deadly weapon.