SACRAMENTO — Nearly six years after a cross-dressing prostitute was found dead of multiple stab wounds near a lonely corner of 1st Avenue and Broadway, police arrested a 34-year-old man blocks away from where the crime occurred.

It was halfway past midnight on May 19, 2004 when officers found 22-year-old Thyotis Jackson face down with a cut throat and stab wound.

During the initial investigation, homicide detectives believed Jackson was working as a male prostitute, dressed like a female, when he got into a dispute with an unknown subject. The investigation stalled until last year, when a witness came forward with new information. The renewed investigation led to the identity of Ignacio Bulahan, 34, as the suspect. Later, forensic evidence was processed that supported this lead. Based on the investigation, detectives believe that Bulahan murdered the victim, although it is still unclear what the motive was for the crime.

Detectives arrested Bulahan Friday on murder charges at his residence in the 3500 block of 1st Avenue without incident. 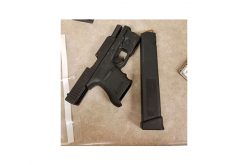