A Deputy observed a vehicle being driven by Eric Silk-Hoaglin who he knew from prior law enforcement contacts. The Deputy conducted a traffic stop on the vehicle which had several moving traffic violations. The vehicle ultimately yielded in the 1000 block of North State Street.

Upon contacting Silk-Hoaglin, he consented to a search of his vehicle and informed the Deputy that he was out of custody on bail which was later confirmed.

The Deputy observed several rounds of ammunition on the driver’s side floorboard of the vehicle and immediately detained Silk-Hoaglin.

The Deputy ultimately continued the investigation, collected additional evidence and developed probable cause to believe Silk-Hoaglin was in possession and transportation of a controlled substance for sale.

The Deputy also determined that as a result Silk-Hoaglin was committing a felony offense while out on bail on a separate unrelated case.

Silk-Hoaglin was booked into the Mendocino County Jail where he was to be held in lieu of $50,000.00 bail.” 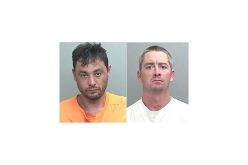