“On 05-07-2021 at approximately 11:13 AM, Mendocino County Sheriff Deputies received information an adult male, (Ishmael Nash) who was wanted for felony and misdemeanor warrants, was hiding in an apartment in the 100 block of Laws Avenue in Ukiah, California.

The Deputies went to the address provided and contacted an adult female who they identified as Alissa Crosswebb who was in the residence. Crosswebb and Nash have a child in common.

Crosswebb would not let the Deputies into the residence to search for Nash. Crosswebb told Deputies Nash was not at the residence and she had not seen him in over a month.

Crosswebb was advised of the consequences for harboring a known wanted felon, but she still refused to allow Deputies access inside the residence or provide any information on the whereabouts of Nash.

The Deputies left the residence and continued to try and gather information regarding Nash’s whereabouts.

At approximately 12:10 PM, Deputies saw Crosswebb driving her Dodge Charger in the 1400 block of South State Street. As the Deputies passed the vehicle, they saw a subject in the rear passenger seat who they could not positively identify due to window tinting.

When the Deputies finally caught up to the vehicle it was parked in the 900 block of Marlene Street (city of Ukiah) with the back passenger side door open and Crosswebb in the driver seat.

Crosswebb was arrested for 32 PC (Harboring A Known Wanted Felon).

A short time later the Deputies received information Nash was hiding in a nearby residence.

Deputies and Ukiah Police Department Officers went to the residence and received permission to enter the residence to search for Nash.

Nash tried to flee out the back of the residence, but was apprehended in the creek bed behind the residence by UPD Officers.

Nash was arrested for his felony warrant (29800 (a)(1) PC Felon In Possession Of  A Firearm) and misdemeanor warrant (1203.2 PC Probation Violation). Nash was also arrested for the fresh charge of 148 (a)(1) PC (Resisting Or Obstructing An Officer).

Crosswebb was transported to the Mendocino County Jail where she was booked, to be released after the jail booking process on zero bail pursuant to COVID-19 bail schedule set forth by the State of California Judicial Council. 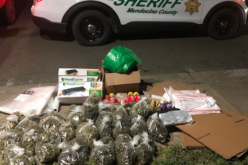