December 2, 2020 – Ventura County, Ca.
On December 1st , 37-year-old Oxnard resident Joseph Barkley was spotted by a witness as he entered an Oxnard neighborhood home where he did not live. The witness promptly dialed 911, but as Oxnard Police Department units were responding to the scene, Barkley was observed exiting the home.

According to the Oxnard Police Department Watch Commander, as he attempted to flee the area, Barkley was “being chased by neighbors” and he immediately ran into another house.

Police arrived shortly thereafter and “formed a perimeter” to prevent Barkley from making another run for it.

At that point, communication was initiated with Barkley. After some pointed conversation, Barkley indicated that he would not exit the residence voluntarily, and that he was in possession of a loaded shotgun. Over the following two hours, police conducted negotiations with Barkley.

As those proved of little value in resolving the situation, officers attached to the OPD Special Enforcement Unit arrived on the scene.

SED officers then recruited the services of an OPD K-9 unit by the name of “Rocky.” Once Rocky was tasked with removing Barkley from the premises, things moved quickly. Barkley was ultimately subdued and taken into custody, whereupon he was transported to Ventura County Jail and booked on charges of trespassing, first-degree burglary, and resisting arrest. He
remains in custody pending a bail hearing. 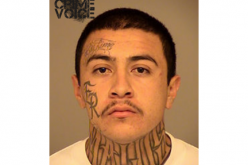