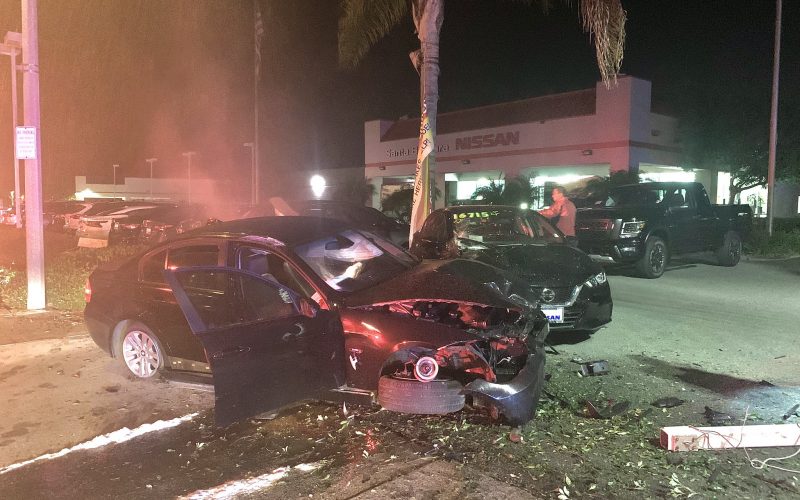 39-year-old Goleta resident David Mata was arrested on DUI and associated charges following a violent collision on the night of August 26th in which the car he was driving jumped a City of Goleta curb and plowed into multiple vehicles on display at an auto dealership lot.

According to Santa Barbara County Sheriff’s Department spokesman Brad McVay, Mata was driving a BMW sedan northbound on Goleta’s primary commercial boulevard “at a high rate of speed” when it veered off the thoroughfare, smashed into a fire hydrant, and collided with “at least three vehicles” at the auto dealership.

First responders found Mata suffering serious injuries, whereupon he was promptly transported to Santa Barbara Cottage Hospital for medical treatment.  Minor injuries were reportedly sustained by his 14-year-old male passenger who was also transported to the hospital for treatment.

At the hospital, Mata “refused to take a blood-alcohol test” and reportedly had a blood alcohol level “greater than o.15 percent,” nearly double the permissible level. With two prior convictions for driving under the influence, Mata “is facing criminal enhancements” to the following charges currently filed against him: driving with a blood alcohol level greater than .08 causing injury, child abuse under conditions likely to cause great bodily injury or death, and driving on a suspended license related to a prior DUI conviction.