33-year-old David Wayne Caldwell Jr. of Yreka appeared in court on July 21st just before 9 AM, to be remanded to custody by the presiding judge, when he “bolted from the courtroom” before the bailiff could restrain him.

Following an extensive search of the area by both Siskiyou Sheriff’s Deputies and Yreka PD, a “Code Red” was broadcast locally, though it failed to garner any useful leads.

Caldwell was finally discovered hiding in a trailer park on the R-Ranch in the Hornbrook area just before 9:30 AM on July 24th.

On top of the unrelated felony charges already attached to his name, he is now on the hook for a felony escape warrant.

Siskiyou County Sheriff’s Department reports in an official press release that Caldwell was booked into the county jail, but posted bail of $150,000. 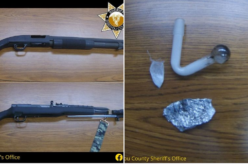