SALINAS—One teenager is dead and the other critically wounded after they held customers’ hostage in an attempted robbery of Saltillo Tortilleria in an East Salinas neighborhood. 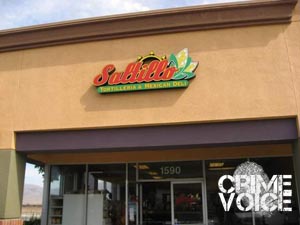 Scene of robbery and shooting

At approximately 6:45 p.m. on Thursday, two armed teenagers walked into Saltillo Tortilleria with the intent to commit an armed robbery.  The two suspect demanded money from patrons and the owner while holding them at gunpoint.

The suspects left the restaurant and tried to get into a nearby business but failed.  They were eventually driven to a local hospital for treatment by a relative.  The first suspect, Jose Antonio Ceja, 17, of Salinas was pronounced dead shortly after arriving at the hospital.

The second suspect, also a 17-year-old Hispanic male, was stabilized in a local hospital and then flown to a Bay Area hospital and is expected to survive.  He will be transported to Monterey County Juvenile Hall.  He will face charges of robbery and conspiracy to commit robbery.

The “Good Samaritan” was interviewed extensively along with the patrons inside the restaurant. The gun that the “Good Samaritan” used was registered to him and he had it properly stored in his vehicle. “The way to store a weapon in a vehicle is to have the gun locked in a case in the trunk and the magazines or bullets in the glove compartment,” Salinas Police Officer Miguel Cabrera said.

“We do not encourage people to take the law in their own hands,” Officer Cabrera added. “It was better to observe and report by calling 911 then to possibly get killed or injured by take the law in your own hands.”

Based on eyewitnesses and video of the incident, the “Good Samaritan” will not charged at this time.  The case has been referred to the Monterey County District Attorney Office for review.

This is Salinas’ 16th homicide of the year and it is the second in two weeks for the area of the East Salinas neighborhood.  The Tortilleria is a mile away from where Salinas Police shot and killed an armed suspect who shot at them.