SACRAMENTO – Warm weather, alcohol and the magic of Facebook conspired to create a chaotic situation Saturday along the American River.  Before the day was over, the event made local and national news due to fights that erupted, accompanied by at least 12 arrests.

Revelers enjoy the American River prior to brawl

Billed as “Rafting Gone Wild,” many of the celebrants decided to live up to its name.  Reports from the scene mention at least 50 people engaging in numerous fights along the river.  Weapons of choice included rocks and raft paddles.

A similar event held last year yielded only 10 arrests.  However, the 2011 debacle also saw 100 people injured. There were no reported serious injuries from this year’s  event.

Two factors that possibly helped keep trouble at a minimum this year were a stepped-up police presence and the calmer waters of the American River. 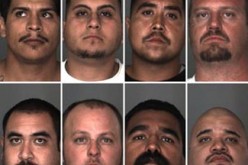