SACRAMENTO — Following a three-day trial last week, a federal jury convicted a Chico man of possessing methamphetamine with intent to distribute and being a felon in possession of a firearm.

The case against 37-year-old Francisco Morales Rodriguez was the product of a joint investigation by the Federal Bureau of Investigation in Chico and the Chico Police Department, with assistance from the Butte County Sheriff’s Department, the Drug Enforcement Administration and the Bureau of Alcohol, Tobacco, Firearms and Explosives.

According to Assistant United States Attorney Daniel S. McConkie, who prosecuted the case, Rodriguez — a convicted felon — was pulled over April 18, 2008 in Chico for vehicle code violations and arrested for driving without a license. Officers searched him and found over $1000 cash in his pocket.

Later that day, Chico police officers and Butte County sheriff’s deputies went to Rodriguez’s home and conducted a parole search of his house. In the master bedroom, next to the bed where Rodriguez slept, officers found a 12-gauge shotgun leaning up against the wall and a box of ammunition next to the gun. On a nearby desk in the bedroom, officers found a small box of plastic sandwich bags used for packaging drugs. A digital gram scale was found in the top right-hand drawer of the desk.

In the backyard, officers searched a shed near the back exit to the master bedroom. There they found a golf ball-sized lump of crystal methamphetamine, which weighed about 39 grams (over 20 grams of pure methamphetamine) and had a street value of around $1,000. In addition, they found two false-bottomed soft-drink cans used to transport drugs secretly with methamphetamine residue inside. Finally, more than $1,400 in cash was found in the backyard, wrapped in the same kind of plastic as the methamphetamine.

Rodriguez is scheduled to be sentenced by Judge William B. Shubb on May 17 at 8:30 a.m. 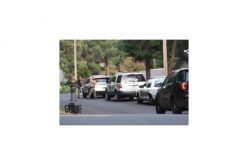