A Mendocino County man with an outstanding warrant was recently arrested, along with a second individual who allegedly tried to hide him under a blanket when the two were contacted by law enforcement, according to the Sheriff’s Office.

According to an MCSO press release, 54-year-old Lee Long and 47-year-old Odessa Oneil — both of Ukiah — were arrested on the 300 block of Brush Street on the evening of Thursday, November 10.

Around 11 PM, patrol deputies in the area noticed a suspicious vehicle and contacted the driver, identified as Oneil. The deputy noticed a large blanket in the back seat and asked if there was anyone underneath it, which Oneil reportedly denied.

When the deputy asked Oneil to remove the blanket, she lifted only a portion of it, continuing to deny that she was hiding anyone. After several minutes, Oneil unlocked the doors and the deputy contacted the person under the blanket, identified as Long.

Both individuals reportedly provided a false name for Long, who was wanted on a felony warrant for alleged parole violation. The deputy also searched Long and discovered he had a can of pepper spray on him.

Both Long and Oneil were taken into custody.

Long is being held without bail, while Oneil’s bail was set at $15,000, the Sheriff’s Office said. 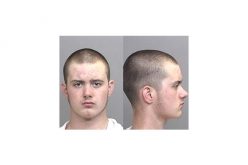